Anastasia, a robotic system from sabanto, has planted over 750 acres across 4 states.

Scott shearer, professor and chair of agriculture, food, and biological engineering at Ohio state university, is leading the efforts to see what and how technology will reshape agricultural machinery industry.

In a recent interview with AgriTalk he said: “It’s been fun working with a lot of companies but what we are trying to do, as you could probably guess, is to begin researching on the advanced concepts that we are going to see in the future.”

What’s the next step in farm technology?

“I encourage a lot of people to observe companies and what they are doing,” He said. Machinery was, is and will be sold and what’s being added to them is where you want to look.

He sees transformation happening before our eyes as technology is making the automation more possible.

He said: “We are moving towards automation, in other words we’re removing operator functions and letting machines do them for us.”

The next step in this field, as he sees it, is not only machine control but also machines making decisions themselves. Putting in short- machines becoming smarter and doing the work themselves.

“Our effort to achieve something that I refer to as machine intelligence,” He continued. “While working, Operator or farmer is continuously trying to find solutions for certain solutions. Hopefully, machines will be doing all that together in future.”

He sees the machines not only getting smarter but also smaller.

“We are caught up in a cycle. In order for farmers to be timely on their farm operations they tend to buy bigger machines. And what companies are offering is its’ evidence,” He says. “The reason behind that is operator’s presence. By removing that machines can get smaller and more will be working on the field at the same time.”

Are there any companies that can bring that into action?

He answered: “There are two companies which I’m closely following because of what they are doing and I will they can give us an insight on what future will be like. One is Sabanto ag and they are automating machinery in Midwest. And the other is Swam Farm located outside Australia who is automating sprayers.

What these two have in common is that they both use smaller machines and are challenging the traditional business model.

He says:” In past farmers used to buy farm machinery but it won’t necessarily remain like that. These companies sell services, instead of machines, and their machinery comes with their services.

Is automation only there for large scale applications?

Shearer answers no. He sees future for farming being scale neutral as technologies gets even closer to the field.

“Large farmers will surely benefit from the autonomy, and so will the smaller ones,” he added.

Are there any other areas where machinery and technology are combined?

“Take a look at John Deere and their recent purchase of Blue River (a farm automation startup company). They’ve been actively and carefully spraying the field and reacting to the vegetables growth. But what I want to see is a sprayer that is able to react and distinguish weeds from crops. And then we only need to apply herbicides on the weed we want to kill,” He explains.

This technology, as early estimates proved, can reduce the application volumes by 70-90%.

Shearer also mentioned that big changes are to be expected as technologies from other industries are being adopted.

He believes machine intelligence and vision systems will be able to actively differentiate between good and bad plants and decide what to destroy.

PrevPreviousSelf-Driving Farm Robot Kills 100,000 Weeds an Hour Using Lasers, Offering an Alternative for the Use of Toxic Herbicides
NextTHERMAL FOGGERNext 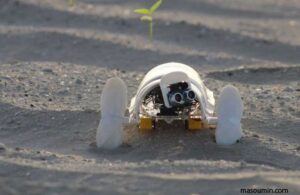